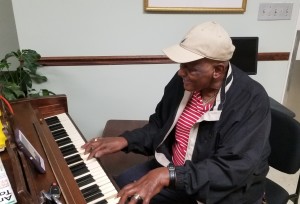 Harold Caldwell, the son of the late Mr. Nathaniel Caldwell, Sr. and Mrs. Wilhelmenia White Caldwell, was born January 25, 1954, and entered into Eternal Rest on Tuesday, July 2, 2019.  He was a fearless optimist who lived life on his terms.  Through life’s peaks and valleys, Harold kept the faith…”the substance of things hoped for, the evidence of things not seen.--- Hebrews 11:1”.  Most people saw the physical, visible and outwardly things.  Harold maintained assurance of things that could not be experienced by the physical senses, but of things divinely guaranteed.  That faith and contentment allowed him to live unbothered … not feeling or showing agitation, worry, or annoyance.  He knew Exodus 14:14, “The Lord will fight for you while you [only need to] keep silent and remain calm.”

Harold helped many resolve challenges with his ingenuity and wit.  He was a loyal friend and protective of his love ones.  One way he showed his love was through his passion for cooking. His culinary skills were a gift as were his musical talents.  Life was never dull when he was around.

Harold attended Newberry County Public Schools and worked as a chef at a number of businesses. Late in life he ventured mid-west and called St. Cloud, Minnesota home away from home for seven years.  As his physical body began to weaken his spirit did not waiver.  He came home to enjoy the remainder of his life with family and friends to live simply, laugh often and love deeply.  Sickness may have invaded his body, but it never conquered his spirit.

“And he will wipe out every tear from their eyes, and death will be no more, neither will mourning nor outcry nor pain be anymore.  The former things have passed away”---- Revelation 21:4

A service summary is not available